Master Food Preserver program in California is on the upswing 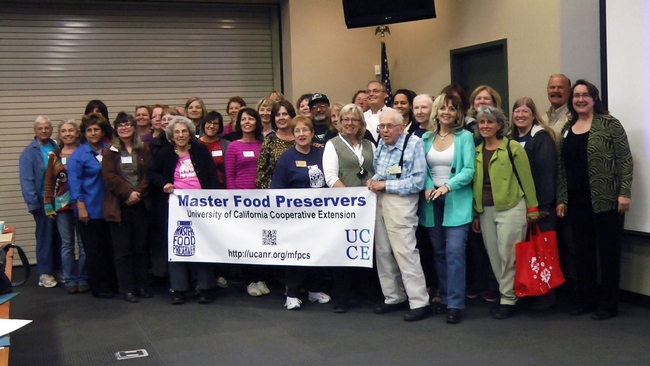 Participants line up for a group photo at the first-ever Master Food Preserver conference.
Home food preservation had been simmering on the back burner for years, but growing interest in eating healthy, local food and a revival of America's can-do spirit has it jamming once again.

The UC Cooperative Extension Master Food Preserver (MFP) program is following the same trend. Established in the 1980s, a small contingent of volunteers offered occasional classes through the years. But a reawakening that spurred rapid program growth was enough to prompt UC Cooperative Extension to hold the first-ever statewide Master Food Preserver conference this month in Stockton.

Master Food Preservers are volunteers who teach people in their communities how to preserve food safely and nutritiously. Nine California counties now have MFP programs and more are planned. Last year, MFP volunteers clocked 15,000 hours teaching courses on safe food preservation. The statewide conference was designed to give the volunteers a networking opportunity, updates on the latest food preservation techniques and tools, and energy to return home and meet the increasing public demand.

“There is a huge resurgence of interest in food preservation among young people,” said Missy Gable, the co-director of the UCCE statewide Master Food Preserver program and director of its Master Gardener program. “People whose parents and grandparents didn't preserve food now want to learn how.”

“You decide to grow food. You're successful. You have a big harvest and throw the first harvest party,” Miller said. “One week, two weeks later, all the food goes bad. You starve to death and the experiment is over. You need to know how to preserve food before you can switch from hunting and gathering to agriculture.” 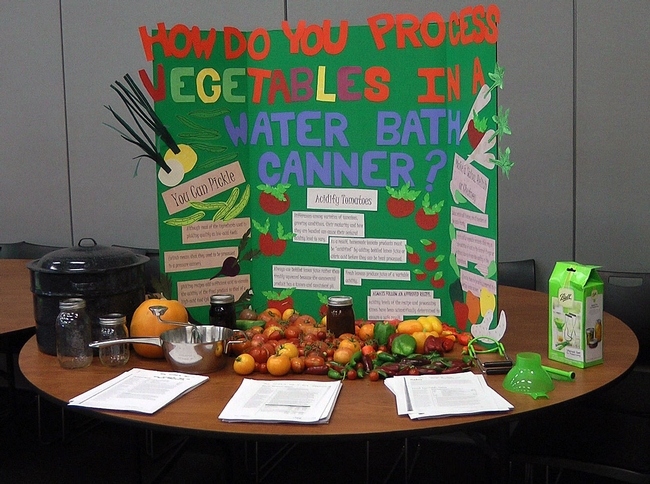 A proponent of all types of food preservation, Miller can rattle off a litany of processes in a few seconds.

Sue Mosbacher, UCCE program representative for the MFP program in Amador and Calaveras counties, said she always begins a class on pressure canning by asking who's afraid of the process. Many hands go up and members of the audience tell of times their grandmothers' pressure cookers exploded.

“What were they cooking? Split pea soup and the peas clogged the vent. With pressure canning, we're just using water,” Mosbacher said. “The first thing I do is reassure them that a pressure canner is a very safe tool to use.”

Mosbacher gets her students excited about canning their own beef stew by trying to read the ingredients on a store-bought stew can, and then the ingredients in her home-preserved stew.

“Potatoes, carrots, onions, beef and a little broth, that's it. And it's delicious,” she said.

MFP Cheryl Knapp of El Dorado County showed that food preservation isn't limited putting up plain fruit and vegetables for future consumption. In her classes, she teaches how to make homemade spice blends using dried peppers and other vegetables from the garden.

MFP Linda Bjorkland of Sacramento County demonstrated an automatic jam and jelly maker she received as a gift. At first she was skeptical, but tried it.

“You just sprinkle the pectin, add a half teaspoon of butter, and the strawberries,” Bjorkland said. “What's the next step? Turn it on. Can you believe that?”

A hot plate heats the mixture evenly and a blade inside the pan stirs continuously. When the maker beeps, add sugar.

“It continues for 17 minutes, and your jam is done,” Bjorkland said. “It's quick and easy. That's the kind of thing your public will want to know about.”

The UCCE Master Food Preserver program is setting up a statewide steering committee, will soon launch a new, completely updated website, and a team of MFP volunteers and UC nutrition specialists are writing a comprehensive MFP handbook.

“This is a labor of love,” Gable said. “I'm thrilled about the developments in our program.”